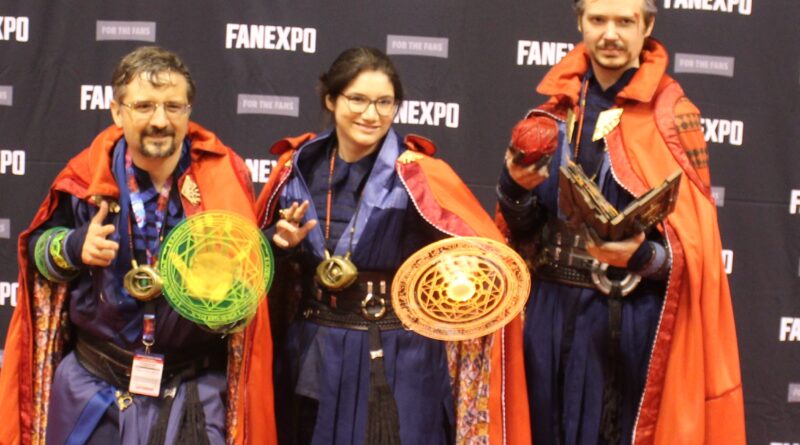 Fan Expo (formerly Wizard World) returned to Saint Louis this past weekend with some much-needed fun for the entire family. Fan Expo is a Pop Culture explosion featuring gaming, comics, toys, collectables, cosplay, Voice actors and movie stars that brought out the crowds that have been longing for its return.

I was curious how Fan Expo would rebound following the 2-year Covid shutdown, and I was pleasantly surprised.  The A+ list of voice talent jumped out to me right away with Dante Basco (Last Airbender), Rob Paulson (Pinky & the Brain), Roger Bumpass (Sponge Bob) and Billy West (Futurama, Ren & Stimpy) appearing all weekend signing prints, taking selfies and recording greetings for fans on their cell phones. Billy West explained to me that he had to get back “in shape” to reprise Ren and Stimpy for the new Paramount Plus TV series upcoming.

Fan Expo vending offered everything from action figures, costumes, comics, artwork to every Funko Pop on the planet including several show exclusives. Some of my favorites included Wild Bill soda company that offered fans FREE Refills with purchase of a mug all weekend, the St. Louis exclusive comic books and a Calico from Sigma Comics, a new comic book with a hero that defends abused animals and they donate money to animal rescue groups….I LOVE IT!!!!

Finally, the celebrity guests. Even with a couple of cancellations (Ming-Na Wen, John De Lancie) Fan Expo still provided the Pop culture hungry fans of St. Louis a top tier guest list that featured Carl Weathers (Apollo Creed), Ron Perlman (Hellboy, Sons of Anarchy), the cast of Smallville (Tom Welling, Michael Rosenbaum and Kristin Kreuk), the View Askew crew from the film Clerks (Brian O’Halloran, Jeff Anderson and Trevor Fehrman) led by Kevin Smith (Silent Bob) and Jason Mewes (Jay). TV icon and astronaut …. Captain Kirk himself, William Shatner beamed down to St. Louis on Sunday. The “King of the Con” went to fan favorite Michael Rooker (Walking Dead, Guardians of the Galaxy) had so much fun playing and interacting with his hundreds of fans, posing for selfies, taking over a news crew to interview his fans waiting for his autograph and taking the time to fill me in on how he got the gig of Yondu from James Gunn. “Rook” is a rock star and I hope he returns with Fan Expo very soon!

Fan Expo St. Louis was a great success! I only overheard a few fans mentioning some possible changes for future conventions like table times for celebrity autographs to avoid long wait times for celebrities to show up and maybe some more comic book companies with new books. But again, this was a fantastic weekend coming out of a pandemic and I am sure that Fan Expo is going to continue to build momentum in the years to come!