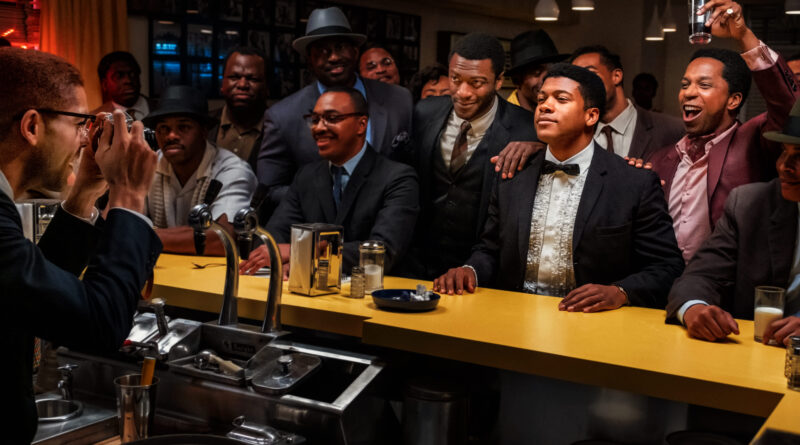 A MOMENT IN TIME

The ever-powerful and talented Regina King is in total control of her meaningful directorial debut, “One Night in Miami”.  In a fictionalized historic night, Cassius Clay (Eli Goree) has just beaten Sonny Liston in Miami to become Champion of the World.  His friends Malcolm X (Kinglsey Ben-Adir), Sam Cooke (Leslie Odom Jr.), and Jim Brown (Aldis Hodge) were in-attendance as both his supporters and his friends.  Led-by the outspoken Malcolm X, the celebratory after party is less than ideal.  Rather than an evening filled with booze and women, it’s just the four of them in a small hotel room.  Just as quickly as their boredom grows, as does their tension.  Their respective “life” trials and tribulations come-to the forefront; Cassius’ struggle with fully accepting the Nation of Islam, Malcolm’s increasing-importance in the Civil Rights Movement, Sam’s disappointment in his less-important song catalog, and Jim’s growing frustration with the NFL and his true desire.  As they argue about each’s importance in the movement, their friendship is truly tested as these four legends debate something much greater than their individual causes.

“One Night in Miami” serves as a brilliant proclamation to the World for Regina King.  She coaxes four of the finest, most authentic performances of 2020 (2021) out of her artists who anchor the success of the film.  All four of them fully-embody their real-life counterparts, but it is Ben-Adir and Odom Jr. who stand-tall above the rest of the pack; which is saying something as Goree and Hodge are each remarkable in their own right.  It is truly impressive how not-only does it feel like you are watching the actual legends on the screen, but also how plausible the conversation and events are.  Most likely Odom Jr. will continue his impressive 2020+ run (his electric performance in “Hamilton” on Disney+ has been revered around-the-World) and add both a Best Supporting Actor nomination as well as a Best Original Song nom for “Speak Now”.  While still timely and powerful, “One Night in Miami” is very clearly a cinematic stage play (unlike “Ma Rainey’s Black Bottom”).  This makes King’s talent even more apparent as she was able to craft so much important information with limited directorial liberties.  I cannot wait to see what she does next; I absolutely place her on the most anticipated follow-up list!  One of the most polarizing moments of the film comes in its opening minutes as Jim visits a man from his hometown.  However, just as things seem natural everything changes and it reminds you just how far-apart this Country can sadly be.

Regina King’s “One Night in Miami” is a masterclass in performance and direction, but an improved script really could’ve catapulted this film up-the-charts.  However, this in no way shape or form takes anything away from the film’s powerful, necessary message or the mark it will undoubtedly leave behind.

ONE NIGHT IN MIAMI is rated R for language throughout