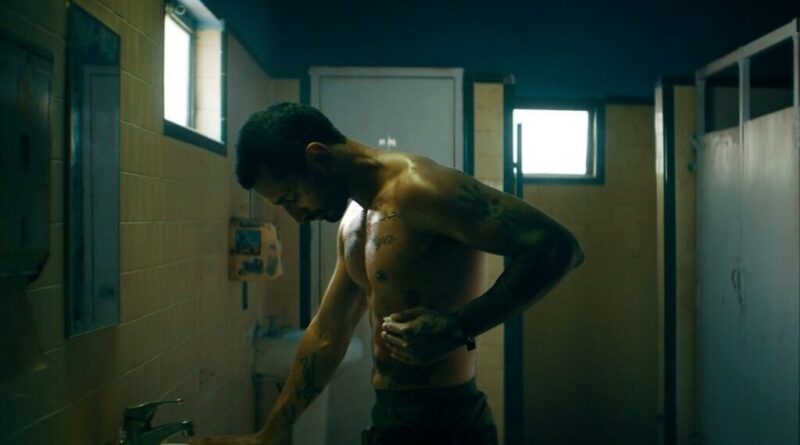 What Would You Do?

“Encounter” follows a young father (Riz Ahmed), hell-bent on saving his family from the new, unknown parasitic alien invasion that’s plaguing society.  After clearly doing his research, he knows that he absolutely must save his kids from this threat.  In the middle of the night, he abruptly awakens his two kids and gets them to get in the car and leave; only after covering them with bug spray to protect them.  However we see signs of a struggle in the house and their mother and her husband nowhere to be found; potentially having already succumbed to the parasites.  As their journey for salvation continues onward, his older son (Lucian-River Chauhan) quickly realizes that his father’s story and intentions may not be as clear as he previously thought and most do everything in his power to protect himself and his younger brother (Aditya Geddada).

Riz Ahmed anchors the film, with one of the hardest yet provocative performances of his young career. The film solely relies on his ability to make us believe and feel for his fight, and in that regard the film absolutely succeeds. The two young leads are charismatic but are never called on for any heavy lifting though they do add an emotional tether to the protagonist.  Octavia Spencer (in her brief appearances) add a moving, heartfelt layer to the tragic story of the film.  However, “Encounter” is clearly more than meets the eye.  The biggest problem I have with the film is how it hits everything so “on the nose”.  It starts off as clever and exemplifies a clever twist on post-traumatic stress disorder, but its novelty wears thin as it becomes blatantly obvious just what’s going on.  It sets up as a great educational device on just how alarming and disturbingly-traumatic PTSD is, but it’s second half ultimately drops the ball and follows familiar tropes rather than exploring new territory.  “Encounter”, while albeit predictable, is tense and gripping; multiple times throughout the film you’re left on the edge of your seat wondering which way things will turn.  At an hour and 48 minutes, the film struggles with pacing as their journey to the truth is uncovered and, as I mentioned before, the second half fails to bring it home.

In a society where PTSD is becoming an all-too-common threat, “Encounter” handles its subject matter with grace and honesty and, coupled with an excellent performance from Ahmed, is deserving of a watch once the film hits Amazon prime video on December 10th.

ENCOUNTER is rated R for language and some violence