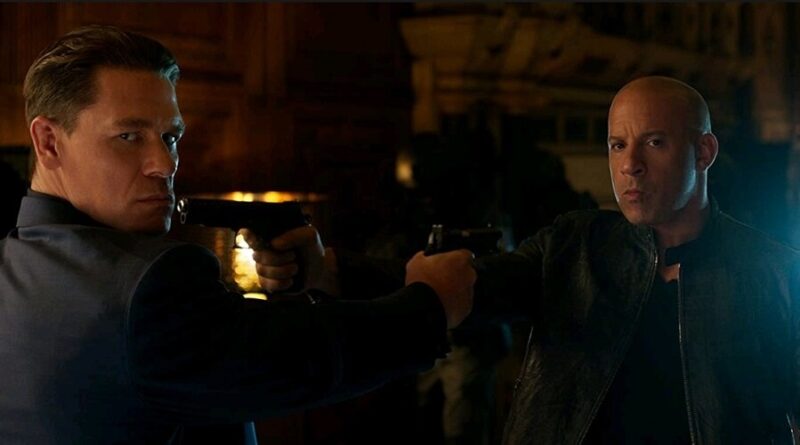 Where Will They Go Next?

After a year-long postponement, the time has finally arrived; “F9” hits theaters this weekend.  The franchise’s previous installment saw the team battle a nuclear sub across frozen waters in Russia, saving the World once again.  “F9” opens with Dom (Vin Diesel), Letty (Michelle Rodriguez), and little Brian adjusting to their new lives in-hiding.  An unannounced visit from Tej (Chris “Ludacris” Bridges), Roman (Tyrese Gibson), and Ramsey (Nathalie Emmanuel) pulls them back-into their new life and, once again, having to save the World.  Mr. Nobody’s plane (Kurt Russell) has been hijacked and the newly-captured Cipher (Charlize Theron) has been stolen.  The target was Ares, a large-scale computer hacking weapon that could control the World from a satellite.  Who could the team possibly be up-against now?  Dom’s younger brother Jakob (John Cena).  Has the team finally met their match or will they take it to new heights (literally) to save us?  You’ll have to watch to find out!

It truly is amazing to sit-back and think how far these racers have come in the last 20 years.  From racing for pink slips to avoiding Armageddon repeatedly, no one can say this franchise has gotten stale by any means.  The sheer ambition alone is truly remarkable.  There are multiple action sequences that are truly jaw dropping.  It becomes clear that the writers hear everyone asking “Where will they go next?” loud and clear.  It goes without saying that you have to suspend disbelief for most of them, but they still make for a thrilling ride.  For the fans, this one is sure to satisfy you on multiple levels!  All of The Fast Saga entries are involved this time around, not to mention a few other familiar faces return as well.  “F9” is by far the most exposition-filled entry yet; the film includes many flashback sequences and so many jumbled, side storylines that you often forget the mission.  Unfortunately this leads to one of the film’s biggest issues, an absurd runtime of 145 minutes.  However, one nice thing that can be said it that the entire cast plays a role this go-around, none of them are just sitting in a corner this time.  The missing presence of Brian (Paul Walker) is felt the most here, with multiple mentions and a special moment that will make you both smile and bring a tear to your eye.

As a long-time fan of the franchise; I’m all in.  We’ve devoted so much time to the crew that they know we’ll follow them along each and every ride.  It has to be respected how they’ve managed to keep the franchise fresh; I don’t think many of us would still be around if we just had to keep watching them street race over-and-over.  Instead, they’ve given us the street racing World’s version of the MCU and Earth’s Mightiest Heroes.  Just turn your brain off, sit back, and enjoy the ride.  “F9” is a wild, reality-breaking, nitrous-filled thrill ride that is sure to entertain all; from the casual viewer to the franchise fanatic!

F9 is rated PG-13 for sequences of violence and action, and language