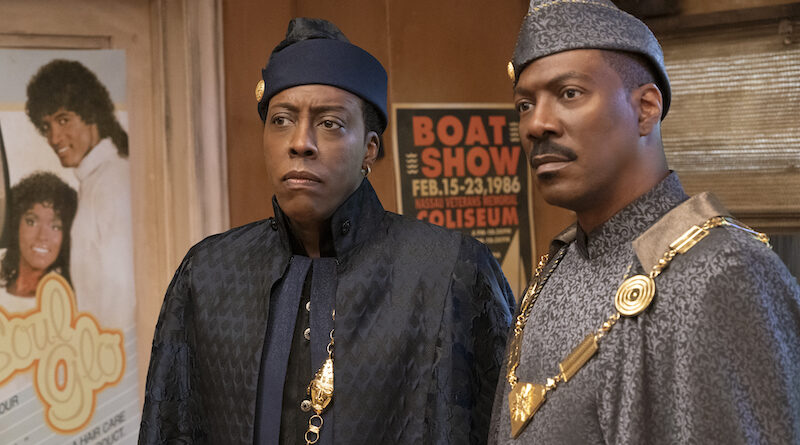 We Return to Zamunda

Needless to say, the 1988 film “Coming to America” sent shockwaves through Hollywood; a nearly 100% African American cast that unashamedly took hilarious aim at multiple cultural, racial, and religious tropes; all while creating some of our favorite cinematic characters of all time.  It’s a crime that it’s taken 33 years for a sequel, but the wait is finally over!  “Coming 2 America” shows that our two soulmates Prince Akeem (Eddie Murphy) and Princess Lisa (Shari Headley) are still awaiting their turn to rule-over Zamunda, with three strong daughters waiting as well.  With King Jaffe (James Earl Jones) nearing the end, he informs Akeem that he has a bastard child in America, the rightful heir to Zamunda.  With the Nextdorians and General Izzi (Wesley Snipes) planning to overtake Zamunda with no male heir apparent, Akeem and Semmi (Arsenio Hall) must return to Queens to find his bastard son and make-sure Zamunda has a proper future.

Ever since “Coming 2 America” was announced, I have been excited.  “Coming to America” is easily one of my most-watched films of all time and it never tires (my wife even gives me trouble for how often I turn it on).  I’m thrilled to say that this was more than worth the wait!  Even though 33 years have passed, Eddie Murphy and Arsenio Hall haven’t missed a beat.  Just like in ’88, the two can still deliver jokes and play multiple beloved characters.  It was also a pleasure to see Shari Headley, John Amos, Paul Bates, Louie Anderson, and of course, the legend himself, James Earl Jones (Rest in Peace Madge Sinclair).  The film features numerous new additions to the cast, including: Wesley Snipes, KiKi Layne, Leslie Jones, Tracy Morgan, Jermaine Fowler, Teyana Taylor, and Nonzamo Mbatha just to name a few.  Of course, “Coming 2 America” is filled with extra surprises and cameos, so you’ll have to see for yourself who else makes an appearance!

The biggest success of the film, aside from its endless nostalgia that put a smile firmly on my face, is how relevant they smartly-tailored the film to today’s society.  Tackling female empowerment, fighting cultural norms, the definition of family, “Coming 2 America” fights to not only entertain, but also for equality across-the-board.  I feel as if they dropped the ball when it came to catering to their audience’s age though, sadly.  These characters are deserving of the R rating and the PG-13 film felt a little “diet” compared to the original.  While only a minor issue, there are many moments where expletive-filled language and moments would’ve fit far-better.  At 110 minutes, “Coming 2 America” never overstays its welcome; providing laughs and smiles for fans of the original.

When it comes to sequels far-past their predecessor’s debuts, “Coming 2 America” is near the top of the list.   The film smartly handles the time-lapse and isn’t afraid to make fun of itself either.  I had an absolute blast with the film; both characters old and new were a delight and the story gives you exactly what you were hoping for.  And for my fellow fans of the original, be sure to stay after the credits!