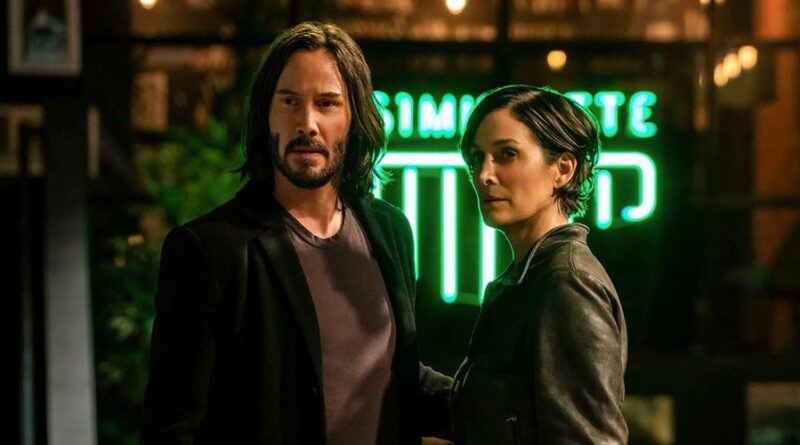 “The Matrix Resurrections” opens with a familiar feel, a sequence of events that cause a heavy, nostalgic feeling of déjà vu.   A young woman is attempting to extract valuable information from an old source of code.  Upon her successful acquisition, she realizes what her next goal is now that what had seemed like a dream or an impossibility was now very much real.  Thomas Anderson (Keanu Reeves) is now very successful and holds an important job title, but his memory of the past is cloudy at best.  His daily life feels strange, almost like a prison.  Does he know his alias?  Does he remember his actions and their consequences?  “The Matrix Resurrections” explores those very questions and so many more and viewers are treated to a brand new adventure.

After so many years, it truly is nostalgic to see Neo and Trinity (Carrie-Anne Moss) together once again.  Lana Wachowski, along with her sibling, created a vast mysterious world at the start of the technological boom so many years ago.  Since then, our abilities have exponentially increased and that’s given Lana the ability to take us back into the matrix once again.  The film’s story takes us to familiar places and familiar faces, almost serving as a reminder, but the film is so self-aware, at times too much so, all while breathing new life into the saga.  Newcomers Yahya Abdul-Mateen II, Jessica Henwick, Jonathan Groff and Neil Patrick Harris are welcome additions to this universe.  They are captivating and all-in, serving as excellent support for our main characters.  They each offer their own unique moments and feel right at home in the story; I certainly hope we see more of them.  While I want dive too-far into our returning characters, fans of the trilogy will be left satisfied.

Many of you are probably asking the same question, why now?  Lana has developed a very intriguing, meta plot that serves as a very self-aware (almost poking fun at itself) analysis of its time gap between this and “The Matrix Revolutions”.  The film is visually-stunning and gives us multiple action-packed sequences, but the most noteworthy ones will have to remain a surprise.  At two hours and 28 minutes, the film feels a little long as his redemption takes some time to come to fruition, but apart from that the film flows flawlessly.  “The Matrix Resurrections” is a thrilling, intriguing journey back-down the rabbit hole that is purely for the fans; but most importantly, they won’t be disappointed!  If you consider yourself even a casual fan, check out “The Matrix Resurrections” on HBO Max beginning this Wednesday!

THE MATRIX RESURRECTIONS is rated R for violence and some language