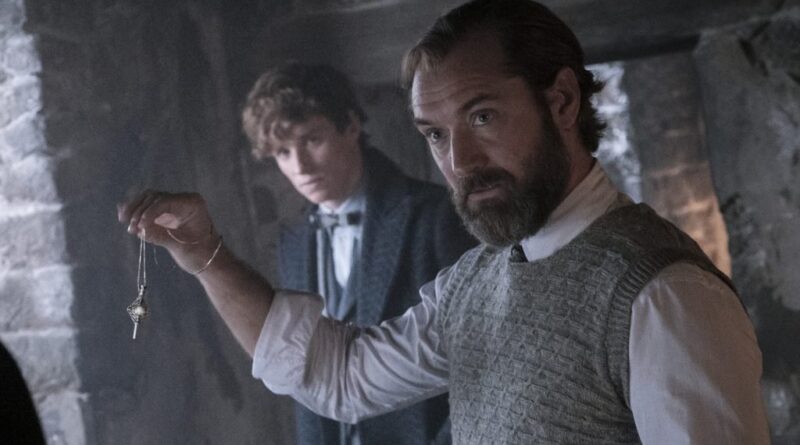 A Return to the Magic

“Fantastic Beasts: The Secrets of Dumbledore”, the third film in this lineage, brings us back to Newt Scamander (Eddie Redmayne) and his battle alongside Albus Dumbledore (Jude Law) against Grindelwald.  With Gellert Grindelwald (Mads Mikkelsen) on trial for his crimes against the muggles, the Wizarding World is filled with anticipation as they are on the verge of electing a new Supreme at the International Confederation of Wizards.  Not leaving his fate up the chance, Grindelwald has developed a plan that will not only see him go free, but see his reign reach further than ever.  With Albus unable to move against Grindelwald due to a blood pact they cast when they were young, he recruits Newt to carry out his mission.  He in-turn recruits both familiar and new faces to join the fight against Grindelwald as they embark on a journey to save both the magical and non-magical world.

As a follow-up to the last film in the franchise, “Fantastic Beasts: The Crimes of Grindelwald”, this film absolutely represents a return to the fun, magical, and fantastic beasts that were initially promised as the saga began.  The film’s tone is also much lighter, but it still carries heavy stakes for its characters and their surrounding World.  With such a heavy burden of playing a beloved character (who we only know during his elder years), it is such a blessing that they found Jude Law to inhabit Albus Dumbledore.  His wit, charm, and comedic timing perfectly embodies the iconic Headmaster.  Redmayne, Ezra Miller, Dan Fogler, Alison Sudol, and Callum Turner all return to offer their own humor and quirkiness that’s synonymous with the Wizarding world.  Mads Mikkelsen, taking over for Johnny Depp, does an excellent job showcasing Grindelwald’s true nature and intimidation.  A truly impressive cast, though some roles are not expanded on enough.

One of the major problems of the film is that everything seems a bit rushed.  Originally the franchise was set for five films, but with the constant negative media attention due to scandals and drama, uneven tones, and boundary breaking subject matter, it’s clear that Warner Bros. is weighing its options for the franchise.  While some are openly vocal against the character arc of Dumbledore and Grindelwald, personally I found their romantic past to be genuine and way less “news worthy” than some make it out to be.  It serves the story, it’s not just in addition to be trendy or relevant.  The films pacing doesn’t do “The Secrets of Dumbledore” any favors either, as it moves slowly to re-establish its characters and then races towards the finish line with very little in between during its 142 minutes of running time.  It feels incomplete and offers far too little of a conclusion.  Hopefully audiences see this film and prove to Warner Brothers that we want to see this story played-out from start to finish!

While it’s hard to call “Fantastic Beasts: The Secrets of Dumbledore” a return to form for the franchise, it is absolutely a step in the right direction and I can only hope that Warner Bros. sees out its vision!

FANTASTIC BEASTS: THE SECRETS OF DUMBLEDORE is rated PG-13 for some fantasy action/violence