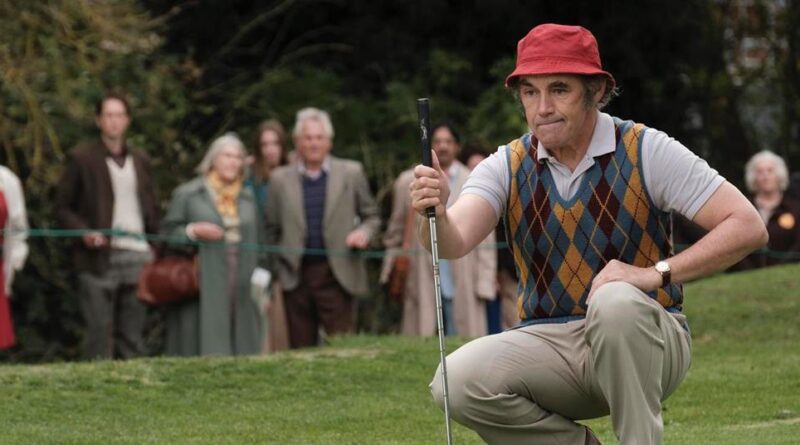 Absurdity at its Finest

Maurice Flitcroft (Mark Rylance) captivated the golfing World and took it by storm in 1976, but not exactly in the way you’d expect.  Working as a crane operator in the docks, Maurice is a father of three and just your typical working-class patriarch.  Seeing his life passing him by, he decides he wants to follow his dreams and sets-out to do the impossible: play in The British Open.  One would expect him to be an avid, talented golfer with those aspirations; but they would be wildly incorrect.  His first venture out to a golf course goes horrendously wrong as he encounters the cruelty of “high society”.  After successfully having his application accepted (after a few choice comments), he sets-out to compete in The British Open qualifier; and this is where “The Phantom of the Open” becomes so much more than a film about golf.

What’s remarkable about the film is that triumph and success are far from its main focus.  I’ll admit that even as a golf fan, I had never heard of Maurice Flitcroft.  So I went expecting a feel-good, sports underdog-to-champion film.  Wow, was I wrong!  “The Phantom of the Open” is so much more and deeper than that.  The film focuses on the importance of following your dreams, no matter the cost.  The film vitalizes the importance of failure when attaining your goals, as it’s a necessary and crucial part to any eventual success.  Not to mention the perseverance that is needed as well.  Flitcroft, endearingly and sincerely played by Rylance, is very much a “glass half full” personality and his take on life leaves you questioning your own.  The movie could have easily retread past and successful sports-movie tropes, but the film is all the better for doing the opposite.

That’s not to say that the film is an immense success either.  Pacing issues are rampant as the majority of the film acts as a set-up to a crescendo that never arrives.  Even at only 106 minutes, the film struggles during its bloated middle 1/3.  As for its humor, the dry, British comedy is at play (which is not quite everyone’s cup of tea”.  But there are far more positive than negatives, as Sally Hawkins’ chemistry alongside Rylance gives the film its beating heart and the emotional core it needed.  In the spirit of Flitcroft himself, the film shoots over par but not nearly as high as the optimist did in 1976.  Instead, you’ll leave with a strong life lesson that will reverberate in your brain long after the credits roll; which is exactly what it seems Craig Roberts intended.