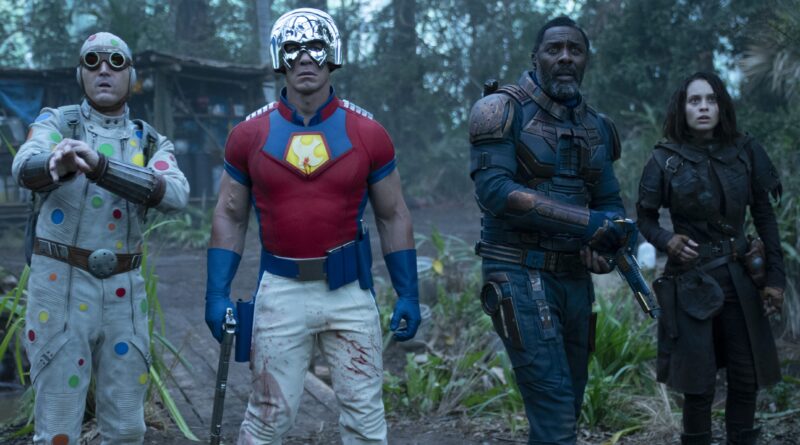 James Gunn brings his imaginative mind back to the big screen, this time giving us a new look at Task Force X in “The Suicide Squad”.  Amanda Waller (Viola Davis) has assembled a team to go infiltrate Corto Maltese and eliminate a major threat.  Each member has an explosive device implanted in the base of their skull, which she’ll detonate if they disobey her orders.  Led-by Col. Rick Flag (Joel Kinnaman), the team consists of Harley Quinn (Margot Robbie), Captain Boomerang (Jai Courtney), Savant (Michael Rooker), T.D.K. (Nathan Fillion), Blackguard (Pete Davidson), Javelin (Flula Borg), Mongal (Mayling Ng), and Weasel (Sean Gunn).  Upon their arrival to the island nation, they’re met with an ambush and we quickly realize this version of “The Suicide Squad” is going to be no-holds-barred.  Enter Squad #2.  Bloodsport (Idris Elba) is grouped with Peacemaker (John Cena), Ratcatcher 2 (Daniela Melchior), King Shark (Sylvester Stallone), and Polka-Dot Man (David Dastmalchian) represents Waller’s back-up option for her mission.  Those who manage to survive must group together and complete the mission; or risk losing everything.

While I am a fan of David Ayer’s (well, WB-corrected) version of the Squad, Gunn undoubtedly sets-the-bar impossibly high in this insanely-violent, gory, and kickass thrill ride!  One of the biggest hurdles to handle when dealing-with this series: the villains.  Gunn assembled nearly double the number of villains from five years ago, but he gives each their own moment to shine; and multiple have very strong, deep characters arcs that serve the larger narrative.  Though she’s made several appearances, this is the deepest and most accurate dive-into Harley yet; Gunn truly does her justice!  Without giving too much away, the other standouts here are Elba, Cena, Melchior, Davis, and Stallone.  The large supporting cast is strong as well; and there’s even a small cameo of a well-known person that you can’t miss!

Were you hoping for insanely-violent action and gore?  Well, you’ll be very happy to know that there are multiple moments that’ll make you squirm!  But it’s not just about the action, “The Suicide Squad” also contains a ton of laughs and even more heart.  Gunn truly brings these characters to-life, making you feel for them.  And the comedic timing of all involved is perfect; each character offers their own style and it works on every level.  It’s no surprise, but the film is accompanied by a great soundtrack as well; consisting from artists such as Pixies, grandson, Jessie Reyez, Kansas, and many more.  The film’s 132 minutes fly-by and leave you fully-satisfied but still craving more.  It should also be pretty known at this point, but STAY UNTIL AFTER THE CREDITS!

Offering a totally different tone from his “Guardians of the Galaxy” offerings, “The Suicide Squad” is a gorgeous, bloody, brutal bonanza that has to be watched again and again!  I have seen it twice now and I can’t wait to watch it again (I HAVE to see it in IMAX)!  This was everything I wanted it to be and so much more; thank you James Gunn!

THE SUICIDE SQUAD is rated R for strong violence and gore, language throughout, some sexual references, drug use and brief graphic nudity