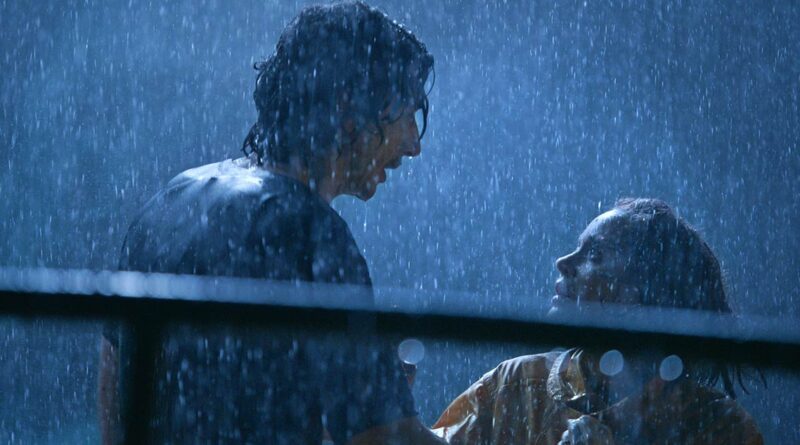 Leos Carax’s “Annette” follows the growing love story between a wildly-successful comedian named Henry McHenry (Adam Driver) and an equally-talented state actress named Ann (Marion Cotillard).  With their fame skyrocketing, they soon find themselves with-child and facing a whole new array of challenges.  As scandal rocks Henry’s career, he must come to terms with what lies ahead, for his daughter and for his marriage.

This is far from your average celebrity love story; “Annette” is a movie-musical the likes of which we’ve never seen.  From the moment it begins until its final frame, song is nearly ever present.  Driver is 100% committed and is clearly enjoying this wacky, out-there role he’s been given.  Cotillard too gives her all, but she shine’s brightest when alongside Driver.  Their chemistry is awkward at times, including while they’re mid-song while Henry is performing between Ann’s legs (this undoubtedly wins the award for most bizarre scene of 2021).  If “Annette” is one thing, it’s full of ambition.  One of the finest moments of the film comes during a heart-bearing monologue shot in 360 degrees that occurs while Simon Hallberg’s character is conducting his orchestra; he will absolutely find himself on the most for Supporting Actor nomination shortlist.  The director has created a truly one-of-a-kind cinematic experience; be it the zany stand-up, strange musical numbers, or inclusion of a doll rather than live child.

The film’s 139 minute run time is much too long, causing the film to have pacing issues and just flat-out, frustratingly go nowhere at times.  The original music, from The Sparks, has its moments but too many of the songs are forgettable and some prove to be too much (or not enough) for our stars to handle.  “Annette” is brilliantly shot and is never short of technological achievement; just makes you wonder what could have been with a different tone.  While I find myself a fan of most (if not all) movie musicals, “Annette” just missed for me.  I’m sure you’ll see some rave about how “different” it is and all, but the film just never took off for me.  I can certainly admire the ambition of all involved though.

While the cast is clearly bought-in, the film just failed to hook me in or keep my interest.  Suffice to say, “Annette” will be an extremely divisive film.  I can’t wholeheartedly recommend a trip to the movies for this film unless it fits your niche, but it is worth a view of Amazon Prime is you’re even the least but curious.

ANNETTE is rated R for sexual content including some nudity, and for language