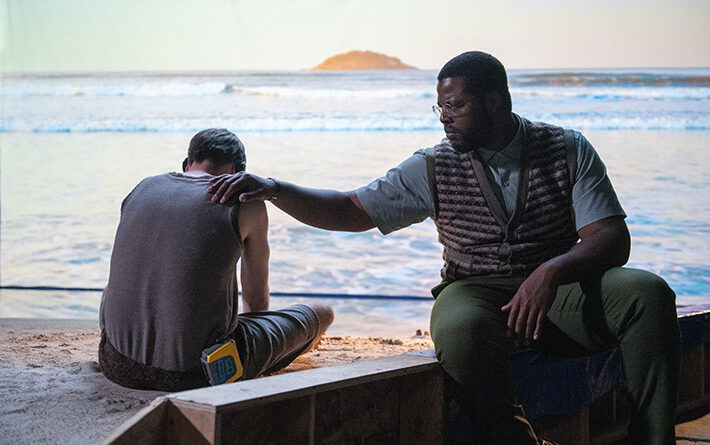 “Nine Days” follows a man named Will (Winston Duke) who spends his days jotting down notes as he watches each of the 20+ TV monitors in his living room.  We quickly learn that he’s watching people live their lives, from their point-of-view.  After the sudden passing of one of his entries, his true profession comes to light.  He’s an interviewer and he must interview 5 different souls for the chance to be born on Earth.  Only one will be chosen, while the other four will disappear forever.  Alexander (Tony Hale), Kane (Bill Skarsgård), Mike (David Rysdahl), Maria (Arianna Ortiz), and Emma (Zazie Beetz).  With the help of his friend Kyo (Benedict Wong), Will must choose which has the best chance on Earth; all while still struggling with the loss of one of his own.

Edson Oda’s debut is one that will stick with you long-after the credits roll.  “Nine Days” is powerful, introspective imagining of how life comes to be that focuses on the importance of the human spirit.  Winston Duke gives a raw, levitating performance that is sure to be talked about for months to come.  His interaction with each of the other interviewees is authentic and genuine, as you grow to care and feel for each of them.  You find yourself feeling their fear and uneasiness as their erasure nears.  It’s remarkable how Oda gives so much with so little exposition, but the film is both gripping and tense.  His chemistry with Wong is also important, as he serves as an important figure in the process.

The film’s true beauty comes from its message of life.  All of the little subtle moments that occur daily or that we take for granted are seen in a new lens; “Nine Days” gives you a new perspective on life and makes you appreciate it all.  The 124 minutes pass by quickly as the story unfolds and we await Will’s choice.  The fragility of the decision is never in-doubt, as you feel one’s life hanging in the balance.  A completely original idea, Oda’s “Nine Days” is sure to upset some as well.  Some will question, where is God?  Religion isn’t the focus here, rather the focus is on the good of one’s soul.  While the film deals with a heavy subject, Oda refuses to preach any beliefs and the product is all the better for that.

“Nine Days” is a moving focus of the portrait of life that is sure to offer a new outlook for those who follow and Duke’s commanding performance demands to be seen!