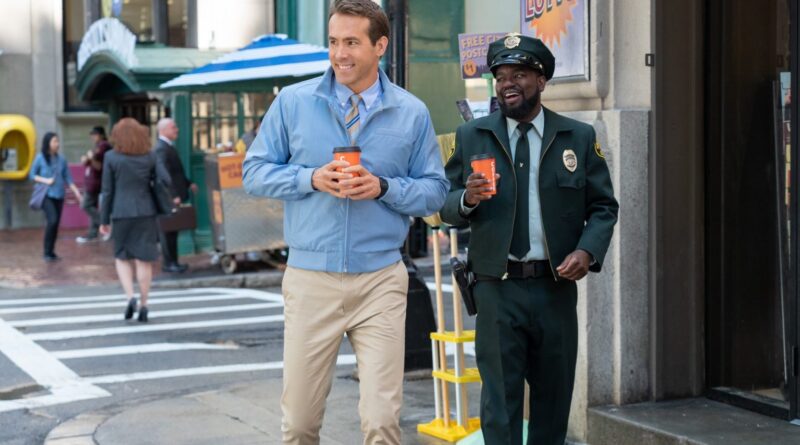 I’m Not Going to Be the Good Guy, I’m Gonna Be the Great Guy

Meet Guy (Ryan Reynolds), a bank teller in Free City.  His daily routine is the same: he wakes-up, tells his goldfish (Goldy) good morning, watches the news as he eats breakfast, grabs a coffee, meets-up with his friend Buddy (Lil Rel Howery), and heads to the bank.  Sound monotonous?  Well, Guy is a NPC (non-playable character) in a video game titled “Free City”; an open-World playground game where you accumulate cash and raise levels by completing missions, committing crime, and killing people.  Think a high-tech “Grand Theft Auto” with a wider-scope.  One day, Guy feels the urge for more; and is captivated by a real player skin named Molotov (Jodie Comer).  Unexplainably, he finds himself unable to shed his desire for change; much to the dismay of the other NPCs.  But Molotov Girl has ulterior motives; she is trying to prove that “Free City” is created by stolen code from her and her friend Key’s (Joe Keery) video game they created, which was purchased and shelved by video game giant Antoine (Taika Waititi).  Will she find the evidence she needs to prove it?  Will Guy snap-back to his programmed way?  You’ll just have to see it to find out!

It’s no overstatement to say that video games are on the path to dominate our culture.  Both film and music have used video game platforms to help their product reach a broader audience.  The growing trend of free-to-play games that offer purchasable content has taken the World by-storm (Call of Duty is my crutch).  “Free Guy” is a fresh and clever take on the video game World, carried by its humor but sticks the landing due to its massive amount of heart.  Unsurprisingly, Ryan Reynolds elevates the film with his ability to portray the “innocent” Guy.  Jodie Comer is equally up-to the task, as she struggles to keep her virtual World and reality separate.  Taika Waititi is clearly having a blast playing the arrogant, entitled, full-of-himself video game designer.  Keery isn’t given much to do, but he shows he’s ready for more.

One of the most fun aspects of “Free Guy” is undoubtedly the surprises, cameos, and references.  As Ryan told me prior to the opening credits, PLEASE DO NOT spoil any of them!  You’ll find yourself noticing familiar faces and recognizing voices, but that’s all part of the fun!  I even missed one that I didn’t notice until the credits were rolling.  The film’s 115 minutes fly-by as you’re non-stop entertained and overjoyed.  One minute you’re laughing, the next you’re sympathetic and caring towards the characters.  As I said, the film is hilarious but what makes it such an excellent blockbuster is its heart and message.  Focusing on the importance of following your dreams, love, and the reason for existence, “Free Guy” proves to be expertly-crafted by Shawn Levy.  I can’t wait to watch it again and see what I missed!

“Free Guy” is by-far the best video game film ever made; full of laughs, fun, and heart; it’s the perfect summer blockbuster for the whole family!