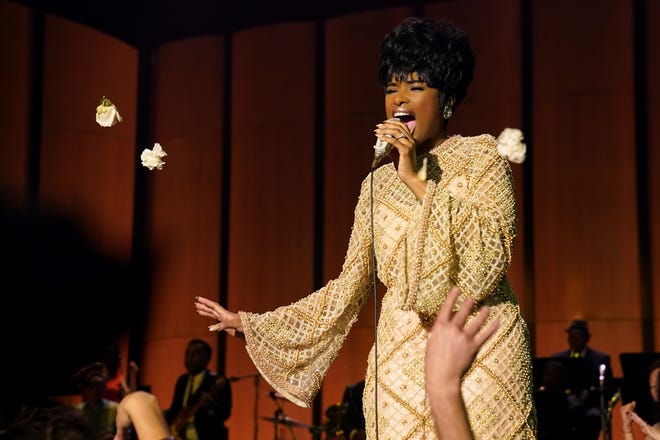 The Queen of Soul

“RESPECT” follows a young girl in Detroit with a powerful singing voice and gift, one that her father C.L. Franklin (Forest Whitaker) loves to show-off at this Saturday evening parties.  The girl’s name is Re, better known as Aretha Franklin.  As she struggles to understand her parents estranged relationship, she knows she must always sing as her mother taught her.  One night however, she’s not called-on to sing.  A young man enters her bedroom and it becomes clear from that moment on, Aretha would never be the same.  Fast forward to her late teens, Aretha (Jennifer Hudson) is a strong supporter of the Civil Rights movement, performing alongside Dr. Martin Luther King Jr. whenever he calls on her.  On a visit back to Detroit, her father surprises her with a plane ticket to New York City, where she’ll sign her first record deal with Columbia Records.  As record after record releases, Aretha is left without any hits and wondering how long she’ll be able to stick with her music.

“RESPECT” has long-been in the making, as the Queen of Soul lived a truly remarkable life.  There has only ever been one person deserving of embodying Aretha Franklin, and that is Jennifer Hudson.  She was born to play this role; her voice and soul perfectly capture the singer and invites you into her life.  While the film may not be all too special (more on that momentarily), Hudson’s performance is truly divine; I’ll be angry if we don’t see her during Awards Season!  The rest of the cast, consisting of: Whitaker, Audra McDonald, Marlon Wayans, Titus Burgess, Saycon Sengbloh, Hailey Kilgore, and Marc Maron to name a few are strong, and give a powerful layer to the film to supplement Hudson.  However, the film follows the familiar tropes and blueprint of past musical biopics (even “Walk Hard”) and fails to truly deliver a worthy encompassing of Aretha’s life.  While civil rights are a main point of Aretha’s life, they fall by the wayside once her recording career begins in the film.  There’s a mention here-and-there, but its importance to Aretha is horribly understated.  The film also takes liberties with her life, which I found to be in strange taste.  Another aspect that drags the film down is its pacing; predictable story lines take too long to develop and, eventually, unravel.  The film’s second half of its 145 minute run time seemingly last forever.  It’s unfortunate, because Hudson’s performance is entirely deserving of a stronger offering, but she gives her all to save the film.

Jennifer Hudson commands the screen in the role she was born to play, but it can’t save “RESPECT” from becoming just another musical biopic; Aretha’s life was clearly just too full and too important to fit into a film.