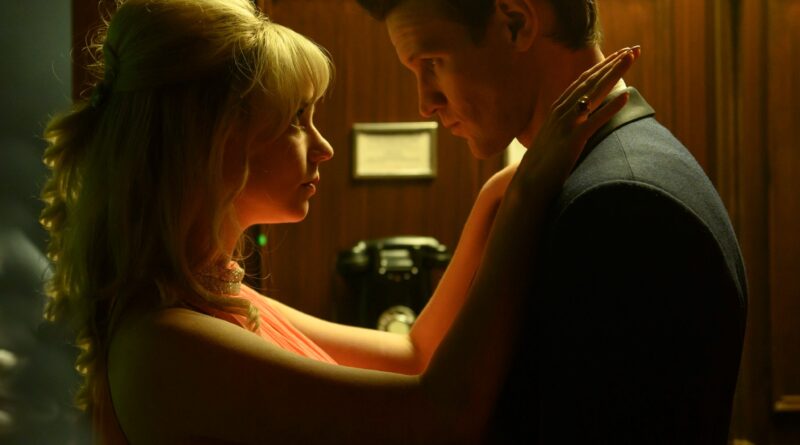 Return to the Sixties

Eloise (Thomasin McKenzie), a young, hopeful fashion designer from Cornwall, has just gotten some of the best news.  Still reeling from her tragic past, she excitedly-learns that she’s been accepted to the London College of Fashion.  Failing to adapt to her new way of life and struggling with her roommate Jocasta (Synnove Karlsen), Eloise decides to move-out of her dorm and into a room for rent nearby from Ms. Collins (Diana Rigg).  Her retro new place quickly envelops her as she’s transported to 1964 London.  A gorgeous, stunning young woman named Sandie (Anya Taylor-Joy) captivates the room as she enters the club.  Dreaming of being a star, she attracts the attention of a young man named Jack (Matt Smith) and they set-off on her journey.  But the promise and dream of a star life quickly fades into the harsh, sad reality of the times.  While Eloise struggles to keep her life and her dreams separate, she’s constantly haunted by the past and present until it all comes to crescendo.

Edgar Wright returns with yet another sensational, music-filled, genre-bending film in “Last Night in Soho”.  A small, but excellent cast consists of McKenzie, Taylor-Joy, Smith, and Rigg, as well as a few smaller roles.  McKenzie proves she’s one of the brightest up-and-coming young actors and Taylor-Joy is a double threat with her acting and singing talents.  Smith has little to do but is devilishly-charming and Rigg, in her final film role, is endearing and funny as the old land lady.  Another major triumph of the film is its editing.  One sequence is so brilliantly shot, constructed, and edited that it almost seems fake, as if you’re watching a computer-generated visual.  You’ll undoubtedly know which scene I’m talking about once you see it; it really is remarkable.  In true Edgar Wright fashion, the film is filled with 1960’s deep cuts (some you’ll recognize, some you may not) that give the film an added authenticity.  While he’s always had a way with music in his films, this may be his true “Tarantino” moment.  You truly feel as if you’ve teleported back to 1964 London due to every last detail.  The film really does serve as an homage to London of the ‘60s, but it’s so much more thanks to Wright’s twisted mind and execution.  One has to appreciate his love and admiration for his home country.  At 116 minutes, the film is slightly-long as its middle takes some time to navigate, but it’s all for a passive payoff.

“Last Night in Soho” is another excellent, stylish offering from Wright, featuring a stunning cast, fitting soundtrack, and a genre-bending story; this is definitely not to be missed!