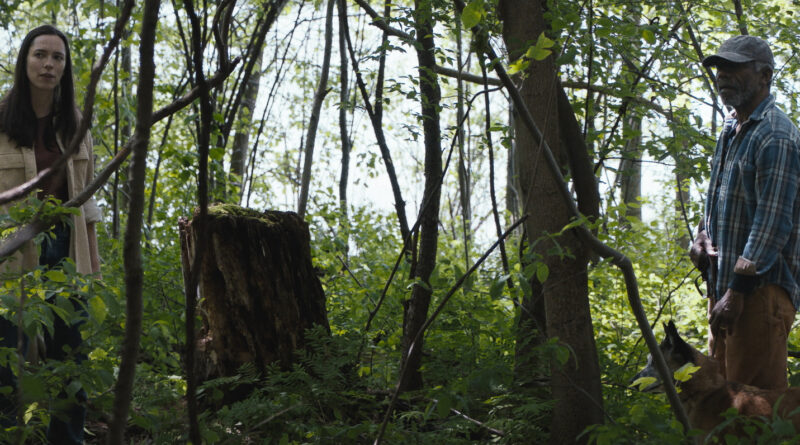 How Well Do You Know Your Spouse?

“The Night House” follows a young woman named Beth (Rebecca Hall), clearly grief-stricken as we quickly learn she’s getting over the very recent death of her husband.  As she attempts to assimilate herself back-into normal life, it’s clear that her husband killed himself only a short time ago.  She’s left in complete grief and despair as she begins to question why he would take his own life.  As she starts to go through things and make sense of it, she uncovers something that she can’t quite shake; a picture of a woman almost identical to her so that she swears is not her.  She continues to dig, but what’s uncovered does all but quench her thirst; it does the opposite.  It becomes clear that her husband may not have been everything she thought he was; as she struggles to differentiate between what is real and what she’s dreaming.

A very tense and gripping psychological thriller, “The Night House” is anything but light and cheery. Dealing with dark and dreary thematic elements and tones, suicide is rampant in the story structure. Rather than used to cheap effect, the film deals with its subject matter seriously, providing a different perspective of the tragedy; the ones left behind picking up the pieces and begging for answers.  Rebecca Hall gives honest and emotional performance which anchors the film; her struggle with reality and dream-state is so genuine the viewer is left unaware what is actually true.  The surrounding cast is limited, but Sarah Goldberg, Vondie Curtis-Hall, and Evan Jonigkeit all have their moments too build Hall’s story along.  Rather than follow familiar tropes of horror films, although there are a few jump scares, the film presents original ideas and twists that you won’t see coming.  While not giving anything away, some of the supernatural elements of the film are shot in a truly believable way; I really found myself wondering just how they managed to pull some of this off.  As I mentioned before, the film is very dark.  Suicide is not only discussed but is even talked about throughout.  Sure to be triggering to those who unfortunately have been affected by it, I can say that it was handled in a mature and respectable way as such a heavy topic deserves.  At 108 minutes, the film truly flies bye as you are left just wondering just what is real and thirsting for answers.

THE NIGHT HOUSE is rated R for some violence/disturbing images, and language including some sexual references