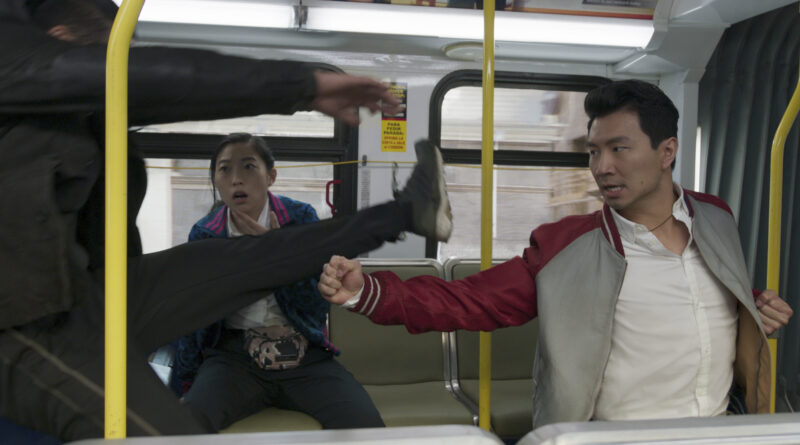 A long time ago, a man who found an artifact that made him the most powerful being, not just in the world, but in human history.  The Ten Rings gives the beholder infinite power and immortality to achieve whatever they wish.  This brings us to Shang Chi (Simu Liu), the child of Wenwu (Tony Leung) and Fala Chen (Jiang Li).  After the death of his mother, his father re-took his throne and the Ten Rings and began to wreak havoc on the World.  Shang-Chi fled to the United States to get away from his father and his evil organization.  When he’s finally found, he is forced to confront his past and find his sister to warn her of the impending doom the lies ahead.  The rest of “Shang-Chi and The Legend of The Ten Rings” follows his story as he fulfills his destiny.

“Shang-Chi and The Legend of The Ten Rings” is not only another excellent film in the Marvel Cinematic Universe, but it’s so much more than that.  As Marvel’s first nearly entirely Asian-led cast the film is an absolute knockout.  It is undoubtedly one of the best Kung-Fu films in recent memory; the action and fight choreography and the visuals to accompany it are truly impressive and make for a gorgeous viewing experience on the biggest screen possible!  “Shang-Chi” has come-under fire recently as Disney moved this away from its Premier Access program to only be available in theaters; while that may be an extreme choice in today’s world at the moment it is truly deserving of the cinematic experience.  Its immersive visuals throw you into the story and its jaw-dropping fights leave thoroughly entertained.  And wow does the film have a ton of laughs and so many ridiculous moments that Destin Daniel Cretton makes work.

Speaking of the cast, Simu Liu is going to take the Avengers by storm.  His charisma, confidence and vulnerability lead to a hero we haven’t seen yet but one that we now know we truly needed.  Often a comedic sidekick, Awkwafina carries herself very well and shows off her comedic chops yet again.  The extended cast featuring Leung, Michelle Yeoh, Meng’er Zhang and some others I can’t say truly make this a great ensemble and a Marvel film that takes major leaps and delivers with massive pay off once again.  You heard it here first: Morris is going to be a VERY hot holiday gift (I already got one for my kids)!  The film’s score is fitting of its theme but also features of a ton of original music that fit the tone of the narrative and combine to give the gorgeous storytelling the service does it deserves.  Some of the film’s CGI is a little overdone but there’s more than enough to bring your focus right-back to the story.  At 2 hours and 12 minutes, the film feels much shorter as you’re whisked-away to another World and taken on an adventure that you’ll never forget.

It should come as no surprise, but Marvel has yet another hit on their hands and it’s going to become a cultural phenomenon!

SHANG-CHI AND THE LEGEND OF THE TEN RINGS is rated PG-13 for sequences of violence and action, and language